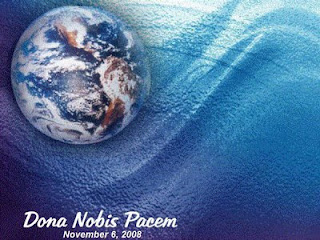 My copy of the oxford essential dictionary defines peace as: 1a. quiet, tranquillity. b. mental calm, serenity 2 freedom from or the sessation of war 3 freedom for civil disorder

My Dad served twenty five years in the United States Navy. It's fair to say that he spent most of his time there as fairly conservative. He voted for Ronald Regan and the first George Bush. But one thing I remember how much he despised the current Bush. He would get so worked up when his name came up. And the main reason....was the war that Bush brought us into. My Dad wasn't the crying type. I can count on one hand the times I've seen him cry and have fingers left over, but when he started talking about the kids that were being sent over to Iraq to fight in Bush's war he would get so upset he would cry. He felt so bad for those that were being sent into harm's way. I wish he had lived to see a new President elected, one that intended to get us out of Iraq.

I spent election night up at Tennessee with my Mom. Now my Mom has never been into politics. If the subject comes up she would normally just move past it. But we sat there Tuesday night, watching the results for the Presidency come in without once leaving our seats. We would flip between CNN and CBS, watching the slightly different results each station would get. We'd see one channel hadn't called certain states for McCain yet, giving Obama a larger lead and we'd say we liked that channel better. I was amazed at how involved my Mom was in the election and how much she was pulling for Barrack Obama. My Mom was born and raised in the country in the South. She's not racist but she isn't completely free of the attitudes and prejudices she was raised with. She's did her best not to raise her children with those attitudes and prejudices. So it was so wonderful to see her championing a black man on to be our next President. Even more so when pretty much all her family around her was pulling for McCain, all her sisters and brothers looked at Obama and saw someone that they did not want for President.

This country is so divided over so many issues. Blacks and Whites. Republicans and Democrats. Hawks and Doves. But I'm hopeful with this election maybe we've taken a step closer to uniting us despite our differences. There's nothing wrong with disagreeing, it helps us see both sides of an issue. But in today's world to disagree means you have to tear the other side down, make them into a monster, label them things that they're not. I think that was one of the reasons that lead to McCain's lose. He was so negative, he tried to paint Obama as a terrorist, a monster, a mad liberal; when it was hard to see that with the Obama that we watched on television and listened to in interviews. I think, I hope, that we are getting tired of that type of politics, maybe it's time to embrace a politics that isn't so mean spirited.

The world was watching our election and most of it rejoiced in our selection. They see our selection not as someone they think will be weak, but as someone that will respect other's viewpoint and be a true champion for peace throughout the world and not a bully that takes what it wants without regard for other nations.

To all the peoples of the world, I once more give expression to America's prayful and continuing aspiration: We Pray that peoples of all faiths, all races, all nations, may have their great human needs satisfied; that those now denied opportunity shall come to enjoy it to the full; that all who yearn for freedom will understand also its heavy responsibilities; that all who are insensitive to the needs of others will learn charity; that the scourges of poverty, disease, and ignorance will be made to disappear from the earth; and that, in the goodness of time, all peoples will come to live together in a peace guaranteed by the binding force of mutual respect and love.
- Dwight D. Eisnehower

Email ThisBlogThis!Share to TwitterShare to FacebookShare to Pinterest
Labels: Politics

i have to stop reading your post before i start cying in front of my pc,i just wish peace from my blog to yours...

Great videos! 4 Nov is a beautiful day full of hope and promise!
Sending *Peace*Love*Light* to ALL!!

I'm so glad Mimi started this peace movement in the blogosphere and even happier to be a part. I'd be much obliged if you would visit Sojourner's Place on this BlogBlast for Peace Day! Let us all pray for peace because War is NOT a card game!

And I have to apologize. Your posts weren't coming up in my reader, and that's why I haven't been by recently. I'll see if I can fix it.

Powerful words. Here's hoping this 44th President is a new dawn as so many hope.

I'm about to start crying all over again...


I hope NOW we realize that..

Thanks for sharing views from your part of the world. I am in the South and totally see how folks of that generation are sometimes parroting what they learned way back when. It isn't pretty. But isn't it lovely that we're beginning to understand how to see one another through color-proof lens?
At least that is my hope.

Peace to you and yours,
Mimi

Your inclusion of the BlogBlast for Peace and the tale of your dad and the evening with mom...PERFECT

Excellent post John! I esp. liked the stories you shared about your parents.

The sheer joy that many people demonstrated over Obama's victory is something I will never forget.

We live in great times my friend! GREAT times!

Thank you for sharing your experience with us.

This policy is valid from 24 January 2007 This blog is a personal blog written and edited by me. For questions about this blog, please contact John @ JohnH985@gmail.com. This blog accepts forms of cash advertising, sponsorship, paid insertions or other forms of compensation. This blog abides by word of mouth marketing standards. We believe in honesty of relationship, opinion and identity. The compensation received may influence the advertising content, topics or posts made in this blog. That content, advertising space or post will be clearly identified as paid or sponsored content. The owner(s) of this blog is compensated to provide opinion on products, services, websites and various other topics. Even though the owner(s) of this blog receives compensation for our posts or advertisements, we always give our honest opinions, findings, beliefs, or experiences on those topics or products. The views and opinions expressed on this blog are purely the bloggers' own. Any product claim, statistic, quote or other representation about a product or service should be verified with the manufacturer, provider or party in question. This blog does not contain any content which might present a conflict of interest. To get your own policy, go to http://www.disclosurepolicy.org/
" If I get it all down on paper it's no longer inside of me/ Threaten' the life it belongs to..." Anna Nalick